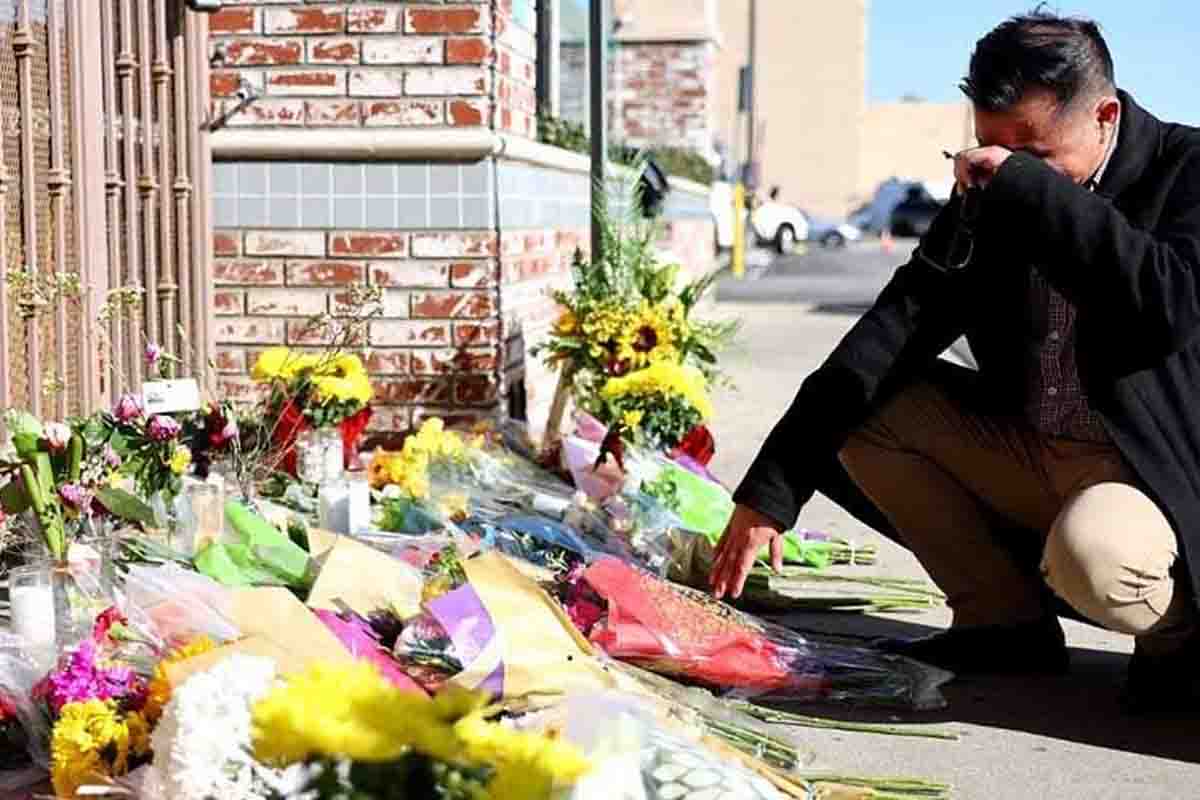 The latest bloodshed occurred at adjacent farms near Half Moon Bay, a Pacific coastal community near San Francisco.

Briefing the media, San Mateo County Sheriff Christina Corpus said seven people were killed and one injured in the twin shootings, and that a 67-year-old Half Moon Bay resident named Zhao Chunli had been taken into custody.

As the new tragedy unfolded, detectives at the southern end of the state were still probing what drove an elderly Asian immigrant to shoot dead 11 people gathered in celebration at a suburban dance hall — before taking his own life.

Suspect Huu Can Tran used a semi-automatic pistol in the rampage in Monterey Park Saturday night, killing men and women in their 50s, 60s and 70s. One person was shot in the parking lot.

He then drove to another dance studio where police say only the "heroic" actions of a young man who wrestled the weapon off him prevented another slaughter.

Hours later, Tran shot himself dead as police moved in on his white van.

Los Angeles County Sheriff Robert Luna said Monday that Tran, who had been arrested in 1994 for unlawful possession of a firearm, fired 42 rounds in the attack.

But, he said, much was still unknown.

"What drove a madman to do this? We don't know. But we intend to find out," he told reporters.

Detectives were looking at Tran's previous connections to the two dance studios, with personal relationships a key area of interest, the Los Angeles Times reported.

Monterey Park resident Chester Hong told AFP on Sunday he believed a domestic dispute over an invitation to a Lunar New Year eve party could be at the root of the attack.

Luna confirmed officers had been told Tran may have been known to some of his victims, but said there was currently no evidence he was related to any.

On Monday a picture began to emerge of a man who, according to his marriage license, had immigrated from China, and who had been a regular at the Star Ballroom Dance Studio in the past.

Tran's ex-wife told CNN the couple had met there two decades ago when he offered to give her informal lessons.

The woman, who did not want to be named, said they married a short time later, but the relationship did not last, with the divorce finalized in 2006.

She said Tran, who sometimes worked as a truck driver, was not violent, but could be impatient.

A man who said he had previously known Tran said he would complain about dance teachers, who, he claimed, would say "evil things about him", CNN reported.

He was "hostile to a lot of people there," the man told the broadcaster.

Detectives who searched a mobile home where Tran had been living in Hemet, 85 miles (140 kilometers) east of Los Angeles, recovered a rifle, electronics and ammunition, Luna said.

Police in the city said earlier this month Tran had made "fraud, theft, and poisoning allegations involving his family in the Los Angeles area 10 to 20 years ago."

Saturday night's mass shooting was the worst in the United States since a teenage gunman in Uvalde, Texas killed 21 people at an elementary school last May. All but two were children.

The toll in Monterey Park, one of California's largest Asian communities, rose to 11 on Monday when one of those injured in the attack died in the  hospital.

Nhan's family said the tragedy was "still sinking in."

"She spent so many years going to the dance studio in Monterey Park on weekends," a statement said.

"It's what she loved to do. But unfairly, Saturday was her last dance.

Amid the grief, attention has also focused on the actions of 26-year-old Brandon Tsay, who grappled with Tran ballroom lobby to rip his MAC-10 9mm semiautomatic weapon from him.

"He was hitting me across the face, bashing me in the back of my head, I was trying to use my elbows to get the gun away from him," Tsay told ABC.

"Finally, at one point I was able to pull the gun away from him, shove him aside, create some distance, point the gun at him, intimidate him, shouting, 'Get the hell out here. I'll shoot. Get away. Go.'"