2021 WRAPPED: What made the Philippines’ headlines this year 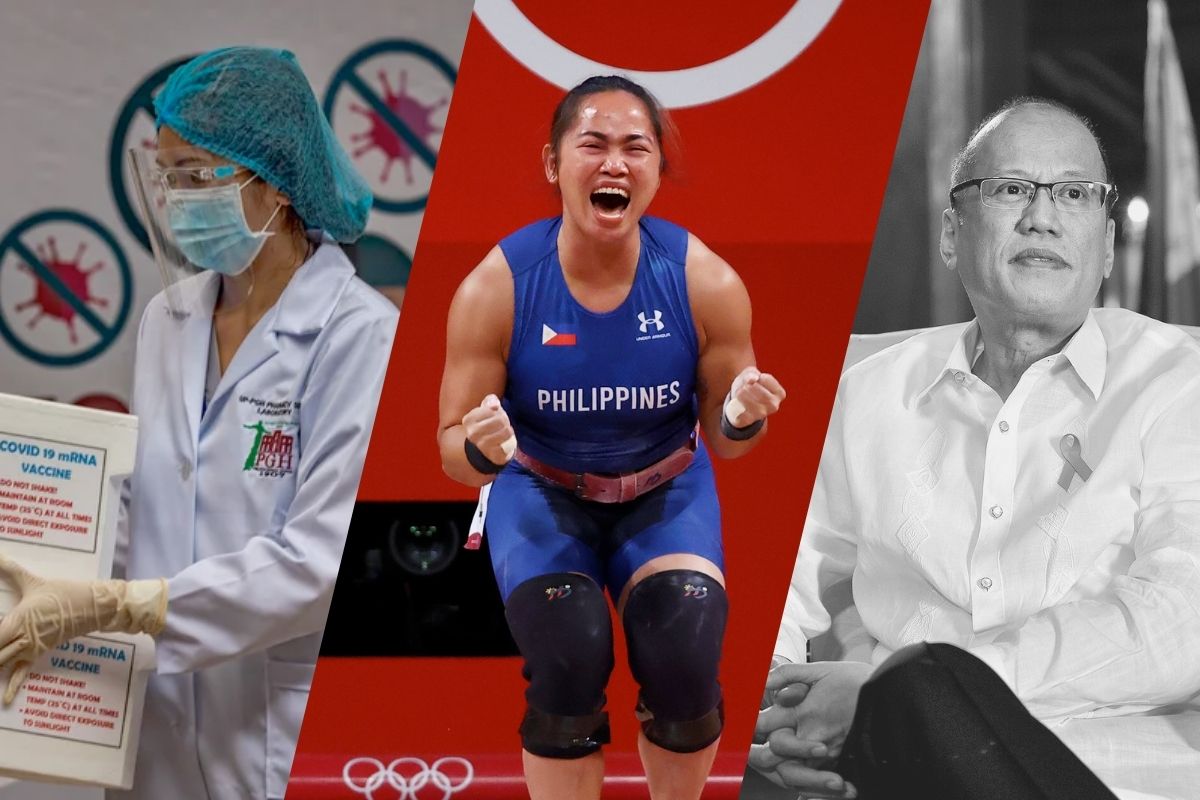 
Here are some of the top stories that made the year 2021 for the Philippines.

Coming from the year of the pandemic, the world had so much hope for 2021. While this year was not exactly much better than the last, it was a push toward recovery. In the Philippines, particularly, 2021 was graced with news that gave a glimpse of hope to a better normal. From the country’s first COVID-19 jabs to our athletes’ victory in the Tokyo Olympics, here are some of the stories that highlight the year 2021 for the Philippines.

During the first quarter of 2021, the Philippines kicked off its vaccination program, marking a significant milestone in its battle against COVID-19. The first jabs were courtesy of China’s initial donation of 600,000 doses of Sinovac vaccines.

The government originally targeted to vaccinate 70 percent of its 110 million population, or roughly 77 million Filipinos by the end of the year. But nine months in its vaccination drive, battling vaccine hesitancy and insufficient supply, the Philippines has lowered its vaccination target to 54 million fully vaccinated individuals by year-end.

As of writing, over 41 million Filipinos have completed their COVID-19 shots, while nearly 55 million have received at least one dose of the vaccine.

The year 2021 is going down in history books as a legendary year for sports in the Philippines. For the first time since the country first joined the Olympics nearly a century ago, the Philippines bagged its first gold medal —thanks to female weightlifter Hidilyn Diaz who snatched the once-elusive win at the Tokyo 2020. Diaz lifted a combined total weight of 224 kilograms, also breaking a world record.

Boxers Eumir Marcial went home with a bronze for the middleweight category; Carlo Paalam bagged silver for the flyweight category; and female boxer Nesthy Petecio became the first Filipina boxer to win in the Olympics with a silver finish in women’s featherweight division.

Another news that came as a shock to the Filipinos this year is the death of former president Benigno Aquino III, more fondly remembered as PNoy.

Aquino died the morning of June 24 after being rushed to the Capitol Medical Center in Quezon City. According to his family, the former chief executive passed away peacefully in his sleep due to renal disease secondary to diabetes.

PNoy, son of late senator Ninoy Aquino and late ex-president Cory Aquino, served as president of the Philippines from 2010 to 2016. Shortly after stepping down from his post, he laid low and stayed away from the public eye.

In Philippine politics, the filing of certificates of candidacy (COC) also made noise in October 2021, what with all the unexpected turn of events in the weeklong happening in Sofitel Hotel in Pasay City.

Senator Bato dela Rosa also filed his COC for the presidency, albeit at the last minute. He revealed in an interview that he only learned that he is the ruling party, PDP-Laban’s standard bearer hours before the deadline of the filing of candidacy.

Weeks later, in November, Bato withdrew from the presidential race.

Senator Bong Go, who was expected to run for president, alongside President Duterte as his running mate, filed his COC for the vice presidency. Weeks later, he withdrew from the bid, and filed candidacy for the presidency, instead, under a PDP-ally political party.

Later on, however, Go announced his withdrawal from the race. On the other hand, Duterte, who had accepted his party’s nomination for the vice presidency, formalized his bid for a seat in the Senate, which he later on dropped as well.

Another last minute and rather expected plot twist in the electoral scene is Davao City Mayor Sara Duterte’s decision to run for a national position. She is running for the vice presidency alongside Marcos Jr., as a substitute for Lakas-CMD’s candidate.

Her candidacy comes after clamors from her supporters pushing her to run for the presidency. Despite this, Duterte was adamant that she will serve as city mayor until her term ends, but eventually changed her plans, much to the delight of her supporters.

Her brother, Baste Duterte, is now running for the head of Davao City as her substitute.

The Philippines saw its worst wave of COVID-19 cases this year, logging a record-high 26,303 daily cases on September 11. This was as the more transmissible Delta variant of the virus spread throughout the country and the world.

The World Health Organization (WHO) declared the Delta strain as the most dominant variant in the Philippines in late August and confirmed community transmission of the virus in the country.

By October, the Department of Health (DOH) said the country was able to control the spread of the Delta variant. A month following the surge in cases, the health agency classified the country as low risk for COVID-19.

The decline in daily COVID-19 cases continued to the last quarter of 2021. This month, the country has been recording three-digit fresh cases daily, logging the lowest single-day increase since 2020.