The first-ever Rizal monument in Alberta, Canada was unveiled on October 23. It serves as a tribute to the hard-working Filipinos in Alberta, as well as to promote the Philippine heritage and culture.

Despite the inclement weather on Saturday, October 23, about 400 attendees from the city of Airdrie and other parts of Alberta, Canada braved the rainy and cold weather to witness the historic unveiling of the first-ever Rizal Monument in Alberta.

Located in Nose Creek Regional Park, a three-foot bust of the Philippine national hero sits on top of a seven-foot pedestal covered with granite and occupied a 36ft x 38ft range within the area where most of the gatherings of the Filipino community take place.

Consul General Zaldy Patron stated that the Philippine Consulate General (PCG) in Calgary was “proud to have initiated and led the installation of the Dr. Jose Rizal Monument,” which the PCG said is its “humble way of honoring the Philippine national hero, paying tribute to the hard-working Filipinos in Alberta, and promoting Philippine heritage and culture.”

Additionally, the new monument of the Philippine national hero is notably the first of its kind in Alberta and Western Canada. It is also the PCG’s largest cultural diplomacy project to date. 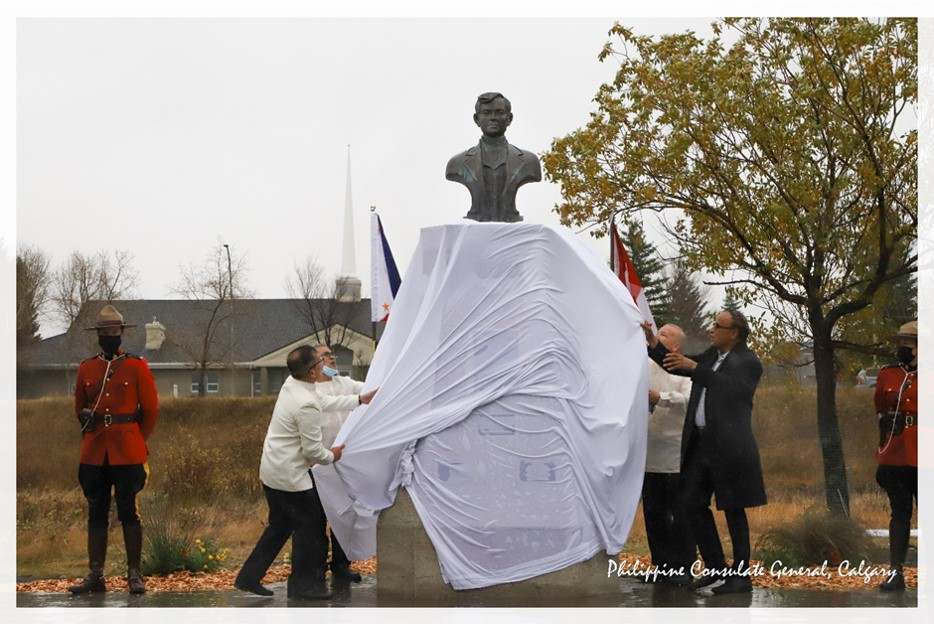 The project was made possible in partnership with the Airdrie City Council, the Filipino Airdrie Association (FAA), and the seven-man Rizal Monument Project Team (RMPT), which Consul General Patron formed and headed.

Alberta Associate Minister of Immigration and Multiculturalism Muhammad Yaseen said the monument serves as an important reminder of the contributions of the Filipino community in Alberta and gives an opportunity to the province to know more about their Filipino neighbors. Yaseen added that the monument would also showcase the multiculturalism and cultural diversity of Alberta.

The PCG and FAA commissioned famed Filipino sculptor Toym Imao to create the 3-foot Rizal bust. It was shipped from Manila to Calgary, then brought to Airdrie.

Consul General Patron encouraged the Filipinos in Alberta to invite other Filipinos, as well as their Canadian friends to visit and enjoy the community's Rizal Monument.