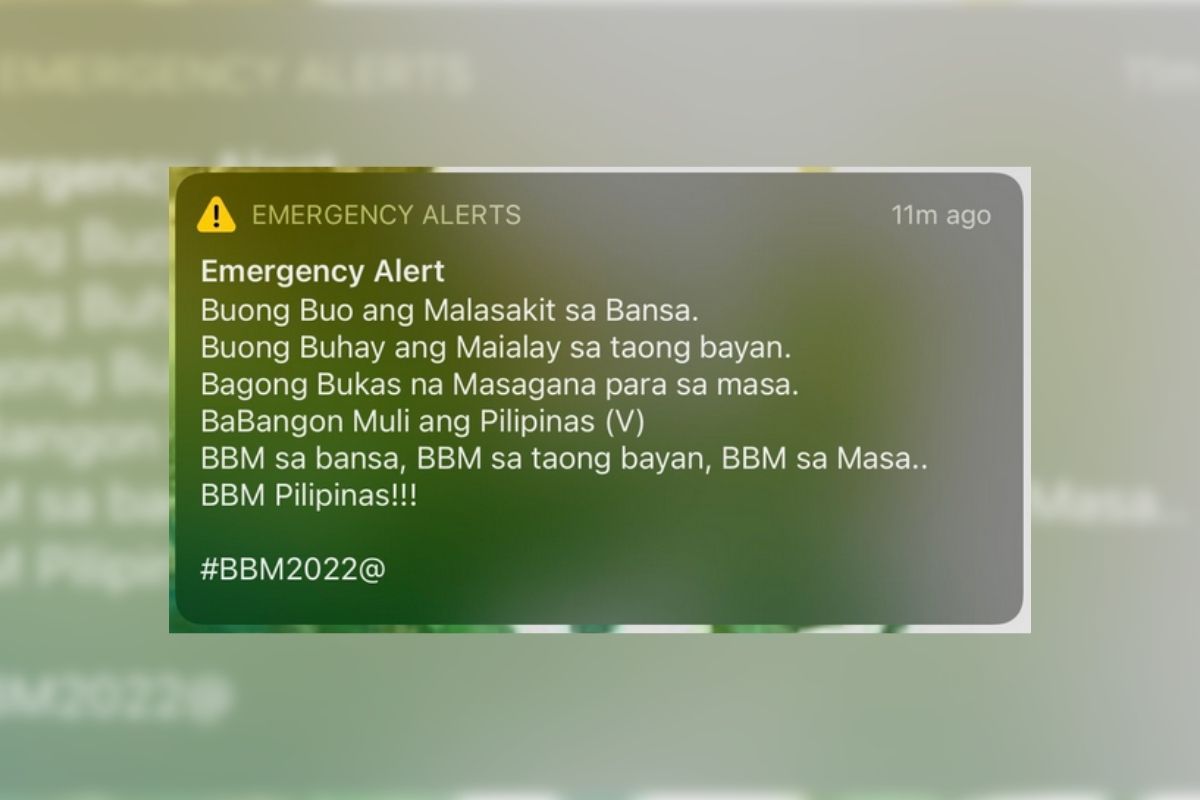 The alert message system is typically used to inform the public of impending calamities such as typhoons and earthquakes.

Under the Free Mobile Disaster Alerts Act, government agencies including the National Risk Reduction and Management Council (NDRRMC), Philippine Atmospheric Geophysical and Astronomical Services Administration (PAGASA), and Philippine Institute of Volcanology and Seismology (Phivolcs) are mandated to send out alerts to mobile phone subscribers near the affected areas.

However, NDRRMC has denied sending the message.

In a report, Rappler quoted executive director Ricardo Jalad saying, “Big No! Ours go through the telcos. They will surely not accept that from us. We are allowed only by RA 10639 to send alert messages on impending hazards.”

Meanwhile, Neri Colmenares, who authored the disaster alerts act, expressed his concern about using the alert system for a political ad.

“As author of the text alerts law, I am concerned about this. Either ginagamit ng BBM camp ang emergency sms facility ng gobyerno or they are misrepresenting as an emergency alert what is clearly a political ad,” Colmenares said in a tweet.

As author of the text alerts law, I am concerned about this. Either ginagamit ng BBM camp ang emergency sms facility ng gobyerno or they are misrepresenting as an emergency alert what is clearly a political ad. Nakakadismaya na may ganitong mga kandidato. https://t.co/uswR4eu3Y5

Bayan Muna party-list Representative Carlos Zarate has called for the National Telecommunications Commission (NTC) to look into the “hijacking” of the alert system.

"This casts serious doubt on the integrity of the system, which people are supposed to rely on for life-saving information,” Zarate said.

“Aside from the NTC and the DITC (Department of Information and Communications Technology (DITC), Congress should also probe this underhanded style of campaigning.”

Commission on Elections (Comelec) Spokesperson James Jimenez called the move “ill-advised” but also noted that there is no specific penalty for it in terms of electoral laws.

“[T]here is no penalty specifically for the use of emergency channels for campaigning - at least not under electoral laws; however, it can be assumed that the emergency alert system operates under guidelines that would prevent the use of the system for non-emergency uses,” Jimenez tweeted.

He added that concerned agencies will determine whether people behind the act would face criminal liability.

While there is no doubt that this use of the emergency alert system is ill-advised at best, whether or not criminal liability will attach to those who are behind this move will have to be determined by the appropriate agencies of government. pic.twitter.com/Op2tiYZvRH