Isabelle Daza under fire for flexing "vaccinated by Pfizer" cap 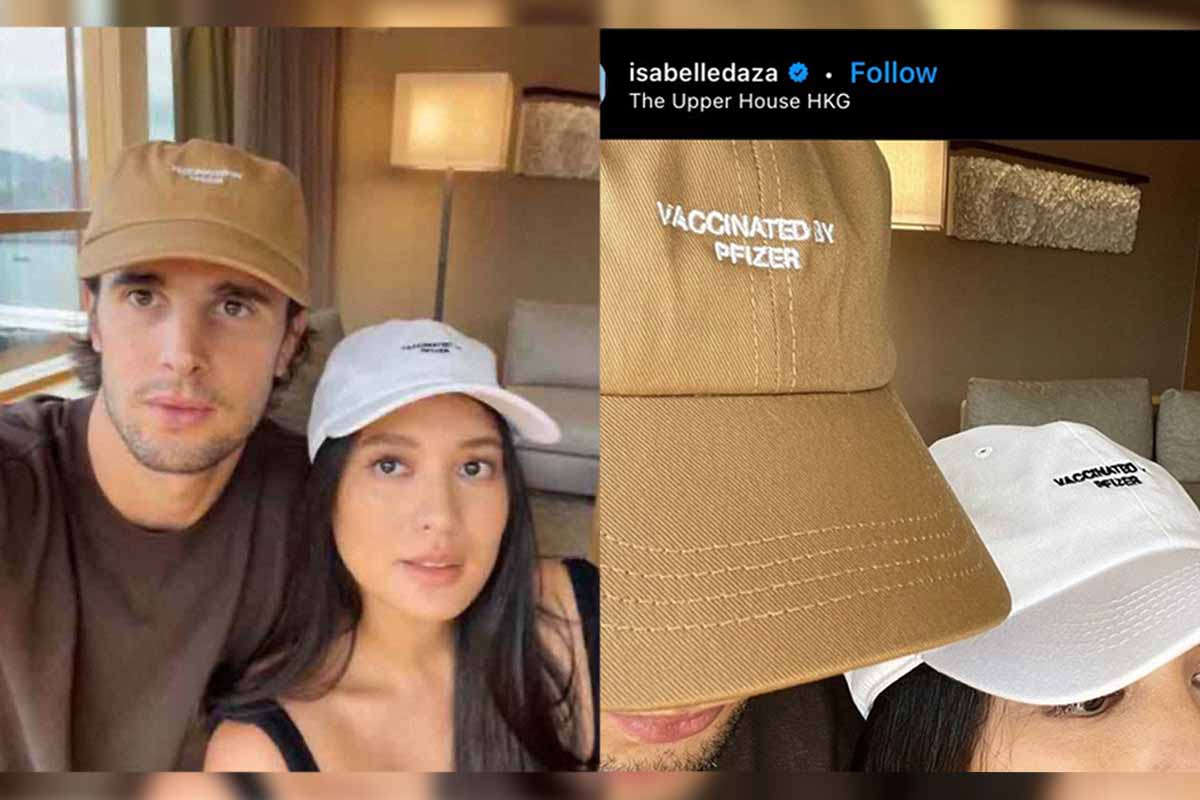 
Isabelle Daza receives flak for ‘insensitive’ and ‘irresponsible’ post where she and her husband posed with their “vaccinated by Pfizer” caps.

Isabelle Daza receives criticism from netizens for her ‘insensitive post’ wherein she flaunted her cap stating she got vaccinated with Pfizer brand of COVID-19 vaccine.

The actress posted on her Instagram page on Tuesday, June 8 the now-deleted photos of her with her husband Adrien Semblat posing together with the caps that read “vaccinated by Pfizer.”

Priced at $49.99, the caps were created by the community-building app Solo Club. The caps were made to raise funds to fight against the devastating COVID-19 situation in India. Solo Club described the statement hats as “a hat to declare your freedom,” along with the hope to raise awareness on vaccination.

The couple received their vaccine in Hong Kong where they are currently based.

Some netizens can’t help but be extra sensitive when it comes to having a choice of vaccine brand to receive because, unlike the Philippines, residents in Hong Kong can choose which brand to receive. This lead to Daza’s post coming across as ‘irresponsible’ and ‘insensitive’ for people.

Many netizens also noted that her post might make Filipinos picky with which vaccine brand to receive. Commenters called out on Daza to use her platform to encourage people to get vaccinated instead, regardless of the brand.

A Twitter user pointed out that Daza seemed to make vaccination a social status. They also put out a reminder that “the best vaccine is the one which is available.”

Not isabelle daza making vaccination a social status 💀 remember guys, the best vaccine is the one which is available.

Rich people are so annoying pic.twitter.com/Q3GvQUe7tB

Another user questioned Daza’s intentions in posting the photo, was it for bragging right?

On the other hand, another Twitter user mentioned how the host-actress’ post emphasizes their privilege to have access to a certain brand of vaccine, calling it “insensitive and plain stupid flex.”

Back to toxicity muna. I think the problem with Isabelle Daza's post is that it gives emphasis on their privileges to have access to a brand of vaccine. And let's not fool ourselves noh that we all want Pfizer for ourselves. It's insensitive and plain stupid of a flex. (1/2)

One even quoted Daza as ‘elitist’ and ‘privileged’ for her post, considering how her followers still generally comprised of Filipino fans.

Being in a country where we have no means to choose — this is so cringey and irresponsible, not to mention hypocritical coming from her who supposedly wants to share “MEANINGFUL” and “VALUABLE” content. Isabelle Daza quota ka na. DIYAN KA NA SA HK PWEDE BA! #Elitist #Privileged https://t.co/nlx2Zgot5D

However, despite the flak, other netizens gave Daza, some people asked if the post caused them ‘harm,’ mentioning that it makes them curious why others were making a fuss out of it.

Despite the good intentions of the cap, netizens reiterated that she should have put more caution in her post.