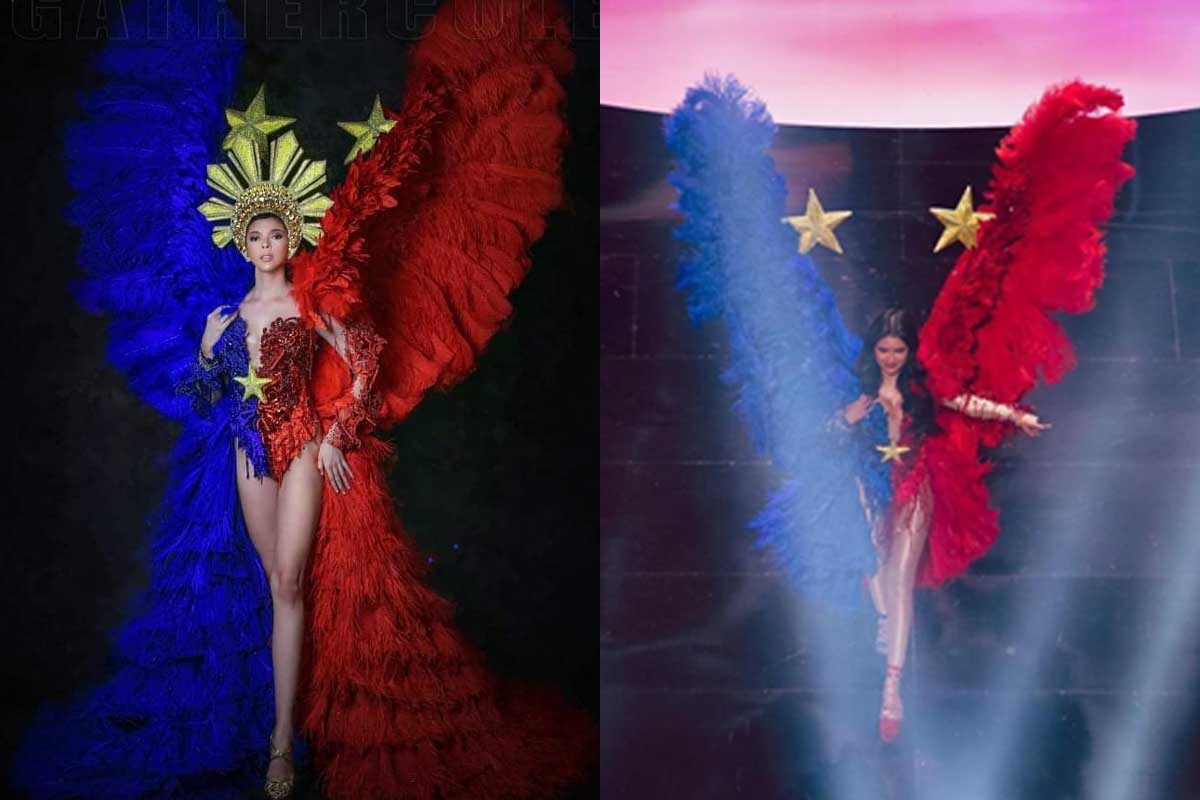 
Why didn’t Rabiya wear the sun headpiece designed by Manny Halasan that completes Rocky Gathercole’s creation? A photo of the complete national costume ensemble has circulated around the internet, which got netizens asking. And here, we have found the answer.

Rabiya’s avant-garde and one-of-a-kind National Costume surely took everyone’s breath away. As said by Rabiya herself, it made her feel like she was a Victoria Secret Angel whilst clad in the glorious-looking costume created by the late popular avant-garde fashion designer, Rocky Gathercole.

Before Rocky’s untimely passing, it was known that he was in charge of designing Miss Universe Philippines Rabiya Mateo’s National Costume, together with Bulacan-based crown maker and jeweler Manny Halasan who’s in charge of completing the elegant national costume ensemble with a headpiece.

Fans from all over the world were all excited for the National Costume portion of the Miss Universe pageant and brought their support to Twitter the day before and on the day of the stint, and trended the phrases "#AribaRabiya," "National Costume," and "RABIYA ShowItToTheUniverse"

Everyone waited with anticipation and excitement for Rabiya to walk on the stage to represent the country. She came out elegantly, donned in the Philippine flag-inspired National Costume, bearing the colors of the flag. Her wings, colored in blue and red, respectively represented “royalty” and “courage and strength” of an independent woman.

The costume also impressed people for the details like the remarkably matching blue and red heels to match her wings. The three stars that were attached to her costume also brought attention as they represented the three main islands of the Philippine archipelago.

However, some were surprised to not see Halasan's headpiece that Rabiya was supposed to wear.

This lead to netizens questioning, and even criticizing the beauty queen for it.

Why Rabiya didn't wear the headpiece

After the National Costume portion, a photo of the complete national costume ensemble has circulated around the internet. Supposedly, Rabiya was supposed to wear a 'sun' headdress, which completes the Philippine flag-inspired look. However, she didn't wear it at the pageant. The costume was also supposedly long, reaching down to the floor, but during the pageant, it was evidently shorter than the original concept. 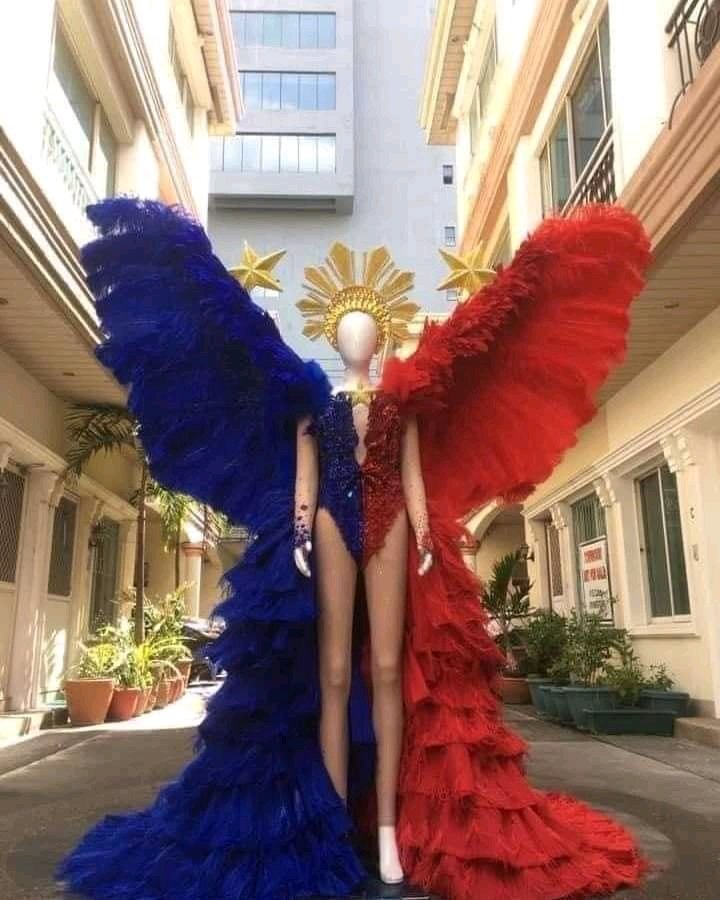 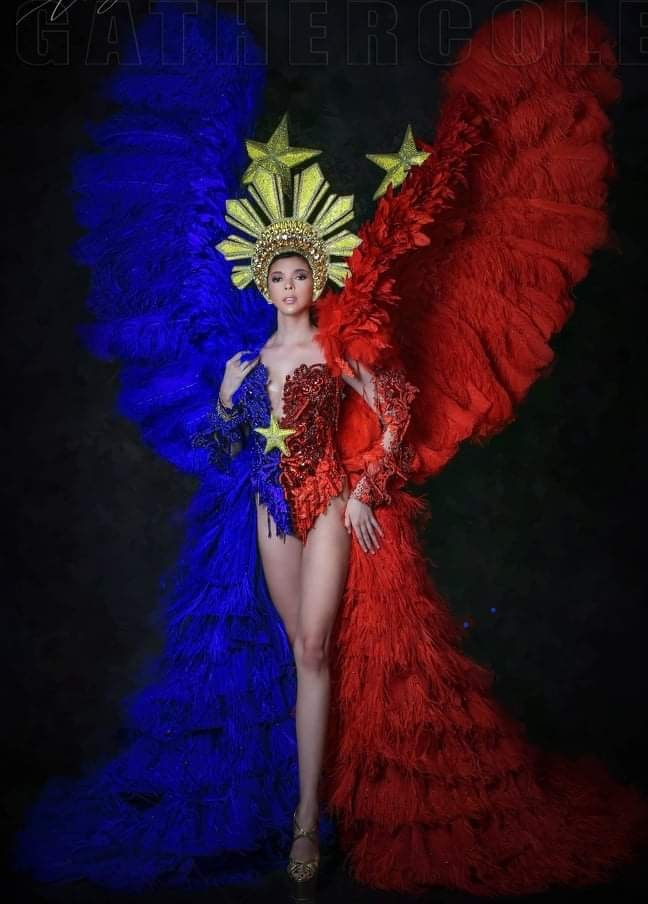 “I’m pretty sure alam niyo naman na I brought the headpice/headdress for Rabiya, but unfortunately, it was… she couldn’t [wear it]. Nahuhulog,” she stated.

“It was hard for her to wear it. So, we decided na kung saan siya komportable,” Shamcey continued. “Mabigat na rin kasi ‘yung wings niya in the first place.”

She also added that they were sad Rabiya couldn’t wear the headpiece, nonetheless, she praised the beauty queen for her performance.

“We’re so sad na hindi nasuot, but still, Rabiya was able to give us a powerful performance.” She concluded.

In a photo posted in the Instagram story of Neat Obsessions (@neatobsessions), it was shown that two men had carried Rabiya’s National Costume piece. take note, not only one, but two grown men had to carry the piece. 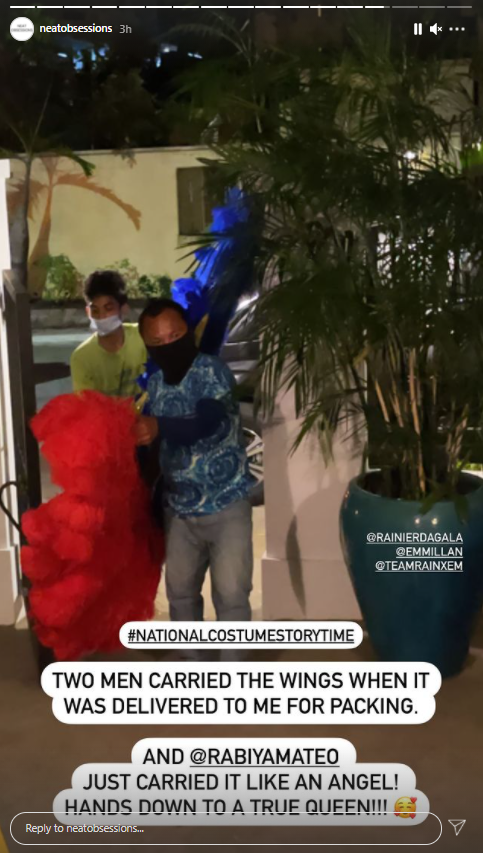 “Two men carried the wings when it was delivered to me for packing,” they wrote.

“And @RabiyaMateo just carried it like an angel! Hands down to a true queen!!!” Their caption read on.

It’s true that the costume undoubtedly weighed more than it looked like, but Rabiya walked down the stage carrying that heavy costume, and in high heels, with confidence.

Rabiya went live on Instagram and expressed her gratitude to the Filipinos who cheered for her during the pageant, but she also apologized for ‘disappointing’ the fans.

The beauty queen came to the IG live, crying, saying that she even caught her finger before the pageant, and her stockings ended up having a lot of blood.

Rabiya was crying during her IG live earlier. Alam n’yang madaming disappointed sa outcome ng National Costume n’ya, but we all know that she did her best. ❤️

We are always proud of you, Queen! Cheer up!!!
#AribaRabiya pic.twitter.com/gn74oye5eF

Despite being faced with an obstacle, Rabiya fought bravely and resolved the problem to the best that she can. She showed her best self during her performance, and she knew that she did.

Towards the end of her IG live, she asked for the prayers of her fans and fellow Filipinos for her and her fellow candidates for them to be able to execute their best performance to achieve their goal, which is to make their country proud.