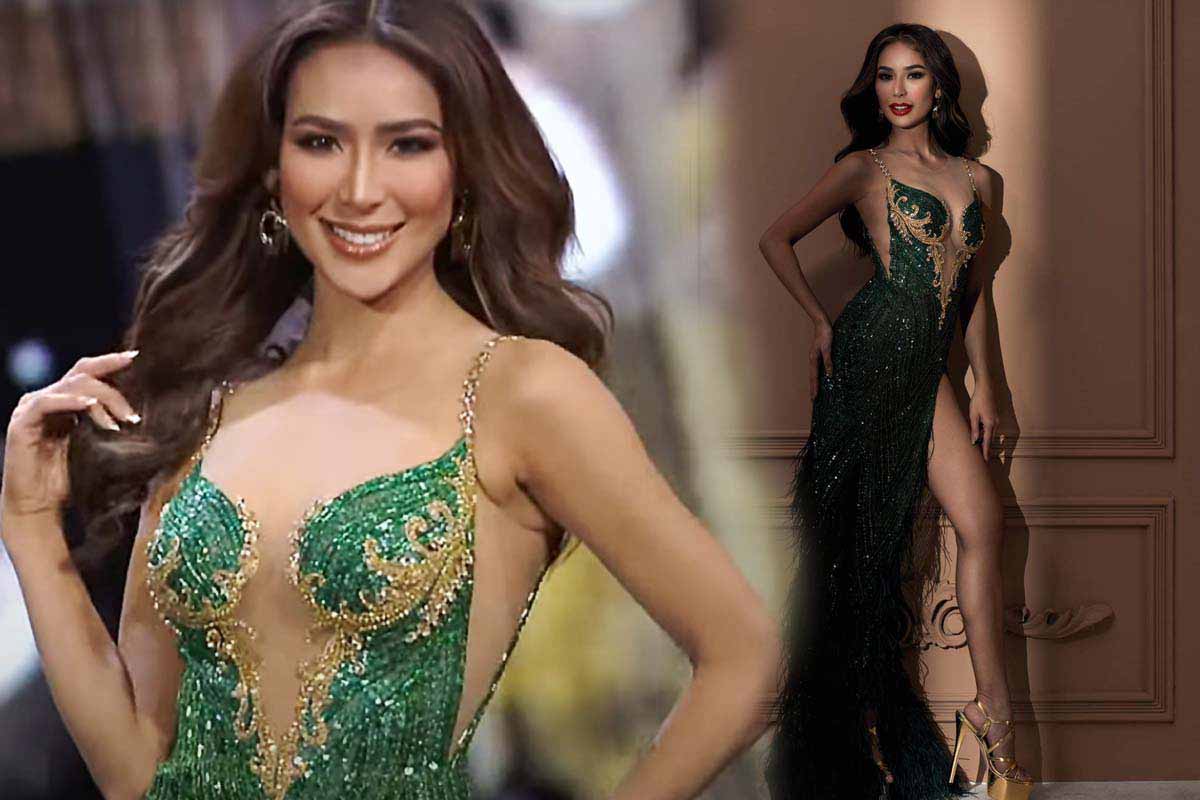 LIPAD. Samantha Bernardo slayed her at the preliminary competition of Miss Grand International, clad in the spectacular ‘Lipad’ gown created by Louis Pangilinan, inspired by the yellow-throat Leafbird. Photos courtesy of Binibining Pilipinas on Facebook, and screengrabbed from GrandTV on Youtube — Sagisag PH

Representing the Philippines, Samantha Bernardo looked absolutely regal in her emerald green and gold evening gown as she showcased her “GRANDnada Walk” in the preliminary competition of Miss Grand International.

Dubbed as “Lipad,” Bernardo’s evening gown was created by Louis Pangilinan, which was inspired by the yellow-throat leafbird, a bird endemic to the beauty queen’s home province, Palawan, and is well-known for its green body and yellow throat.

Binibining Pilipinas shares the meaning behind ‘Lipad’ in a Facebook post, stating: “This emerald green-colored gown is hand-embroidered with beads and sequins. Accentuated with gold crystals as a representation of the yellow throat of the bird and feathers from fibers extracted by hand and worked into fine threads woven together in the lower part of the gown.”

The meaning behind the color emerald green was also included, saying that it “shows a woman’s growth, humility, and courage—characteristics that made our queen Samantha grand and awe-inspiring.”

Bernardo was among the 63 contestants who participated in the live-broadcast preliminaries, which lead up to the coronation night in Bangkok, Thailand on March 27, Saturday. The prelims held on Thursday will determine the top 20 candidates on the finals night.

Bernardo came to the pageant equipped and prepared to take the crown, and many believe that the beauty queen won’t go home empty-handed. Prior to the prelims, she has topped the list of candidates with the most online votes for the second round of the swimsuit competition.

In addition to Samantha’s glamorous ‘Lipad’ gown, the beauty queen also shone in her ornate and extravagant attire for the National Costume Competition which took place the day before the prelims.

Her ‘Agila’ costume, which came in glittering gold, was a piece designed by Patrick Isorena and was inspired by the Philippines’ national bird, the Philippine Eagle. 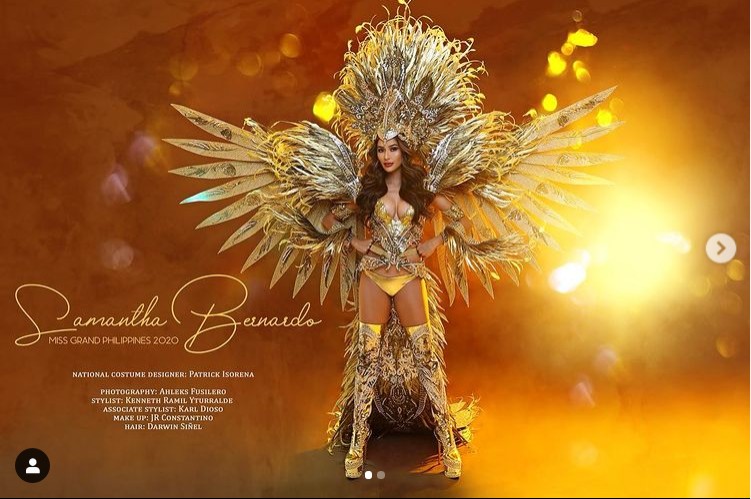 In an Instagram post by the beauty queen, she shared a photo of her wearing the costume

“It is considered to be the largest of the extant eagles in terms of length and wing surface, the rarest and most powerful birds in the world,” Sam wrote in the captions.

Aside from the intricacy of the costume, it also intends to raise awareness to the public on the Philippine Eagle which is now considered an endangered species, because of the evidently massive loss of habitat due to deforestation.

Designer Isorena chose gold as the main color of the costume to represent “the magnificent journey of our queen and to pay homage to the MGI Golden Crown.”

“Extravagant, wealthy, rich, and indestructible. A queen who never gave up on her dreams.” That’s how Isorena described Bernardo.