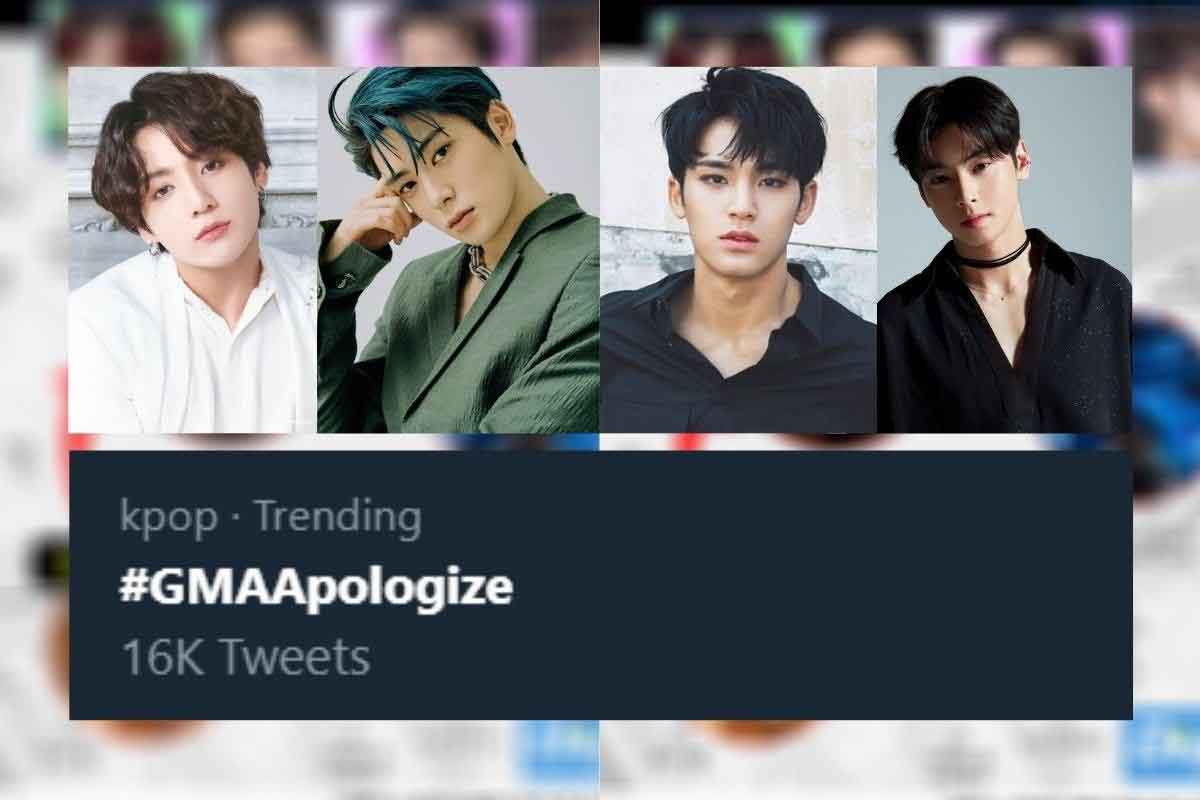 ENRAGED FANS calls for the apology of GMA for their wrong news report.


Filipino KPop fans asks broadcasting giant GMA to apologize for misleading news report on the issue of the KPop idols who visited Itaewon District where the second wave of COVID-19 infections were reported.

The COVID-19 pandemic has subjected individuals from all over the world to new practices and more stringent health protocols, such as physical distancing, wearing masks, and washing hands more often.

South Korea is among the countries in the world which was looked upon to for their advanced healthcare system and the way they handled the pandemic. They conducted mass testing on their citizens when the pandemic broke out, thus immediately identifying those infected and not. This lead to lighter and more eased restrictions around the country.

On May 18, it has been reported by a Korean news outlet, Dispatch, that a group of male K-Pop idols namely BTS’s Jungkook, NCT’s Jaehyun, SEVENTEEN’s Mingyu, and Astro’s Eunwoo were seen together at a bar at Itaewon days before a second wave of the virus was reported in the district wherein a 29-year-old man went bar-hopping to five clubs in the district. Bars in Itaewon have then been temporarily shut down in order to prevent the further spread of the virus.

It has been reported that the four male idols had travelled to a restaurant and then two bars from the evening of April 25 until the morning of April 26.

This controversy sparked a buzz on Twitter, especially within the KPop fan community. Many fans were as far as concerned, disappointed, and angry at the said news, considering the crisis that the whole world is going through.

Apparently, this news reached the Philippines, and broadcasting giant GMA decided to report on it in their segment ‘Chika Minute.’ However, the news report made the Filipino KPop stan twitter community furious at an insurmountable amount that they got #GMAApologize trend for hours on Twitter as so to catch the attention of the network.

WHY ARE THE FANS ANGRY?

No, they are not overreacting. Here are a few points as to why they trended #GMAApologize

1. The report was misleading and lacked fact-checking and research.

NO, they didn't even violate any rules. Second, why is dream there? Jaehyun isn't a part of nct dream. Gumimik, what a nice choice of words. And in the first case pinoy ba ean ha? Anong kinalaman nyan sa bansa naten? di naman tayo korea eh.#GMAAPOLOGIZE pic.twitter.com/j8XxU22O4y

Twitter user @_istan7kings tweeted out their points as to why they wanted GMA to apologize. Among the list is the way the reporter used the word ‘gumimik’ which was misleading. The boys weren’t mentioned to have gone to a ‘club,’ but photos of such were shown, even though in fact, they went to restaurants and bars to dine.

It was also pointed out that the time they went out on April 25 to 26, South Korea has reported no new COVID-19 cases for days, thus leading to the slight easing of the social distancing protocols. It was also mentioned in the news report that the idols violated laws, when in fact they did not, as South Korea didn’t impose lockdown in their country.

#GMAApologize The location was not lockdown that time before you report something please be sure for every detail in your news so there will be no misunderstanding. You should let them speak before you judge. GMA NEVER EVER BE A DISPATCH

It has already been a week since the 29-year-old man who went bar-hopping to five clubs in Itaewon was reported. The man went there on May 3.

To identify the idols, GMA had to use clips and photos of the individuals. However, they made a mistake in identifying NCT’s Jaehyun in his corresponding unit in NCT which are NCT 127 and NCT U. GMA used a clip of NCT Dream wherein Jaehyun is not a member of. Some people may not consider this much of a big deal, but it is, especially for K-Pop fans.

i do think that @gmanews should apologize for involving nct dream into this issue. jaehyun wasn't from nct dream, he's from nct 127. pakiayos naman po ng facts nyo#GMAApologize #ApologizeGMA pic.twitter.com/U3cugWKCxH

The network also used a photo of Jungkook which was originally posted in Weverse, an exclusive website for fans, which has prohibits fans from copying and leaking the photos to other platforms.

Moreover, fans also said that the said news weren’t as far as relevant for other Filipinos, especially those who don’t know the idols or who do not support K-Pop. The way GMA reported the news might have only created misjudgments on the KPop idols, or even the whole industry and other artists as well.

some ph locals are saying the 97 liners arent raised properly bc of what happened. see THIS is why we're mad at gma. we aren't overreacting. instead of sharing accurate news, they're ruining people's image instead. do your fucking research #GMAApologize

This is what I mean why would you broadcast a Korean issue here in the Philippines. Other people don't even know who they are #GMAApologize kaya nga may Twitter eh 🙃 pic.twitter.com/pCTiO8PNPv

If you don't bother reading and UNDERSTANDING the Article and doing proper research before posting false information on NATIONAL TV then it's obvious that you're using the whole situation as CHISMIS and CLOUT. 💀

The audacity to use the word "GUMIMIK" well infact they didn'tThe mispronunciations with their precious names.The fact that Jaehyun was the topic but they used TDS CLIPS will never be funny.THE FACT THAT THEY SAID "FROM DISPATCH"IS SUCH A TRASH!#GMAApologize#ApologizeGMA

Agencies of the involved idols, namely BTS’s agency Big Hit Entertainment, SEVENTEEN’s agency Pledis Entertainment, NCT’s agency SM Entertainment, and Astro’s agency Fantagio Entertainment have released their apology statements in behalf of their artists, and mentioned that the artists are now reflecting upon their actions. The idols have also undergone a COVID-19 test, in which all of them tested negative in.