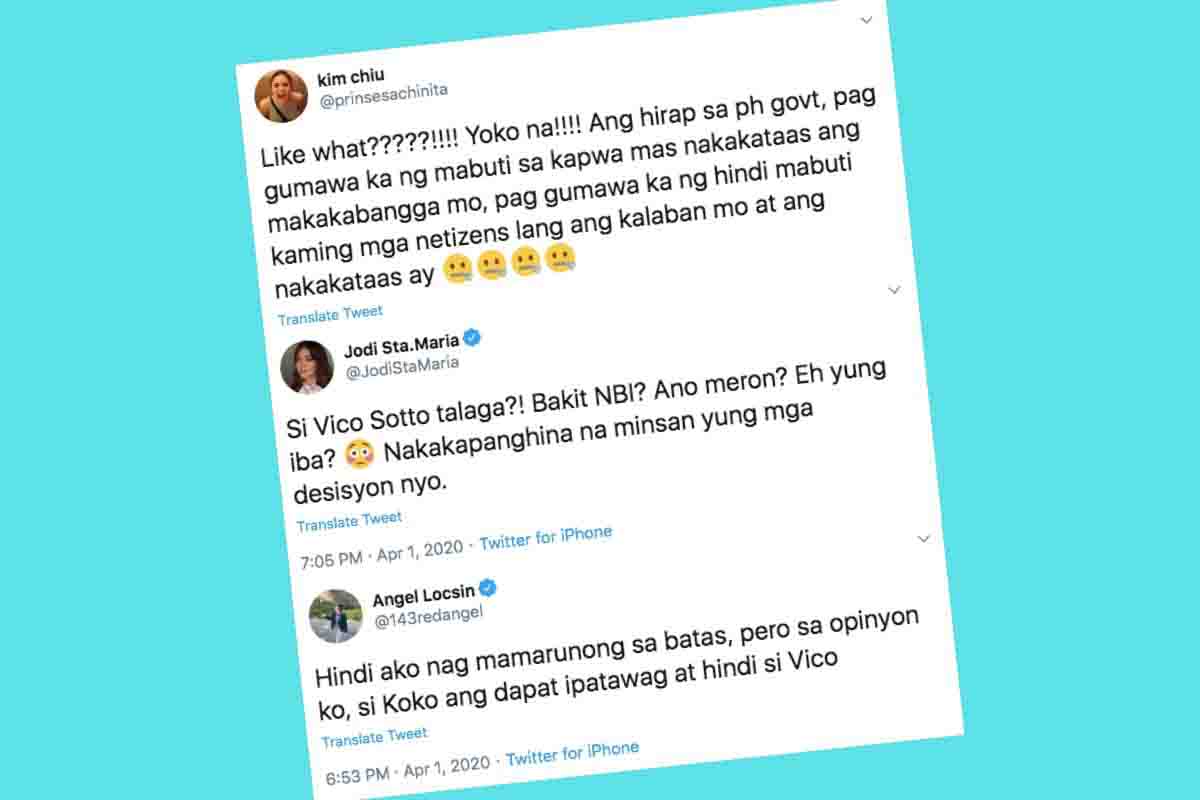 
Finally! We are seeing these celebrities use their platform to speak about the important issues of the government.

The recent day’s trend list on Twitter is proof that the Filipino netizens are all eyes into how the government is handling the situation. On Wednesday, the #ProtectVico trended anew after the National Bureau of Investigation (NBI) Anti-Graft Division summoned Pasig City Mayor Vico Sotto for alleged violation of the ‘quarantine rules.’

Some of the tweets which became viral were from celebrities and television personalities. Angel Locsin, Kim Chui, Jodi Santa Maria, Janine Guttierez, Maris Racal, Bela Padilla, Girltrend Chienna Filomeno, among others used their platforms and stood their ground about government and political issues.

Philanthropist Angel Locsin who is always in support of Filipino’s welfare during calamities and times of need said instead of Mayor Vico Sotto, Senator Koko Pimentel should be the one summoned by the National Bureau of Investigation (NBI) Anti-Graft Division.

Kapamilya actress Kim Chui is tired of it all.

Bela has been vocal about her political stand for a long time now. In the issue of Mayor Sotto being summoned by the NBI, she retweeted Inquirer and said ‘Sayang. May taong tumayo na at gumalaw para sa mga tao. Pinapaupo ulit. #protectvicosotto’

Kapamilya host Bianca Gonzales also defended Mayor Sotto and said he only wanted what is best for his constituents.

Let the working mayor do his job for his people, it was obvious he only wanted what is best for his constituents. #ProtectVicoSotto

In a tweet, Janine said Mayor Sotto is busy and they should summon Sen Pimentel and another mayor which her followers assumed Quezon City Mayor Joy Belmonte.

Hello senator Koko Pimentel, how do you sleep when you lie to us? Chaaaaar not char...

CONTEXT: Girltrends have been in controversy before after performing Sam Smith’s ‘How do you sleep’ dance ‘unprepared.’