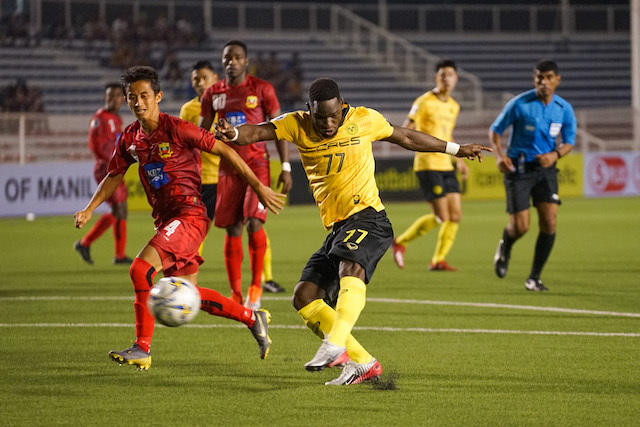 Philippines Football League champions Ceres Negros FC showed their resiliency in hacking out a 3-2 win against Shan United FC of Myanmar in the 2020 Asian Football Confederation Champions League preliminary round, Tuesday night at the Rizal Memorial Stadium in Manila.

The Busmen got off to a sensational early start after forward Robert Lopez Mendy scored for the goal in the 5th minute.

Ceres almost doubled the score in the 21st minute when the shot of Bienvenido Maranon from a Mike Ott feed went off the mark.

But the Filipino-Spanish Maranon bounced back in the 40th minute as he striked Ceres' second goal from a cross by OJ Porteria.

The Leo Rey Yanson-owned team controlled the possession for most of the match.

Mendy also had two sorry misses for a goal in the opening minutes of the second half, both went high off the mark.

Shan United put up a scare in the 73rd minute when Zin Min Tun scored in a wide attack to trim the hosts' lead to 1-2.

Porteria answered back in the 79th minute when he responded well from a cross by Ott to hike the lead of Ceres, 3-1.

Again, Shan United looked to close the gap with Ceres as Djedje Maximin Djawa fired another goal in the 87th minute.

The Myanmar-based club attempts to tie the game in extra time but Nanda Kyaw's free kick sailed high and wide of the mark.

The Busmen will turn its sights on Janaury 21 as they travel to Bangkok to face home team Port FC in the second round of the preliminaries.