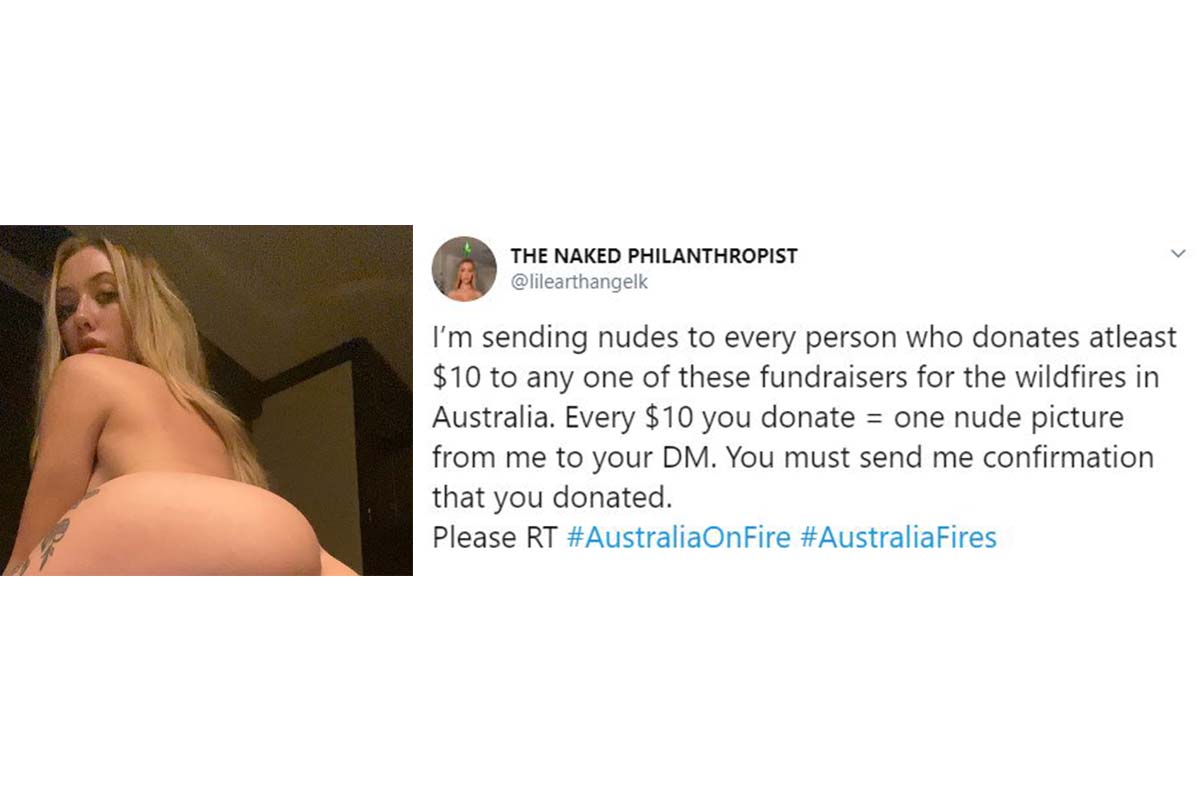 
What started out as $10 worth of donation per photo has escalated quickly.

I’m sending nudes to every person who donates atleast $10 to any one of these fundraisers for the wildfires in Australia. Every $10 you donate = one nude picture from me to your DM. You must send me confirmation that you donated.
Please RT #AustraliaOnFire #AustraliaFires pic.twitter.com/VIgzCUy6Wf

And has garnered a hundred likes and thousands of retweets and counting. Ward promises to give one picture of an explicit photo of her in exchange of a donation to any fundraiser in association to Australia's WildFire, the screenshot of the receipt.

An estimated $700K has been raised for the Australian Bush Fires in response to my tweet....
is this real life?

It’s just been 2 days and the Naked Philanthropist has already racked up a massive $700K dollars worth of donations. Originally just asking for $10 of donations, but some generous people donated more, one actually donated $5,000.

And she’s not done yet, many more direct messages have yet to be opened.

All the donations I still haven’t got to yet! We’re already at $10,000 before all of these. How much money do you guys think we have raised? pic.twitter.com/LNvdq3qkxT

Twitter-verse has been commending her for her heroic act, despite the unorthodox way of fundraising.

Not all hero’s wear clothes

How do I nominate you for woman of the year pic.twitter.com/WQwA7TR2vY

We stan a charity Queen.

Though it wasn’t all support from everyone, as some threw nasty comments as well as others would fake receipts of the donations just for the noods. Though like how Kaylen put it:

“My IG got deactivated, my family disowned me, and the guy I like won’t talk to me all because of that tweet. But fuck it, save the koalas.”

It’s just been two days but who knows how much would this Charitable Undressed Model would rack up in the end.