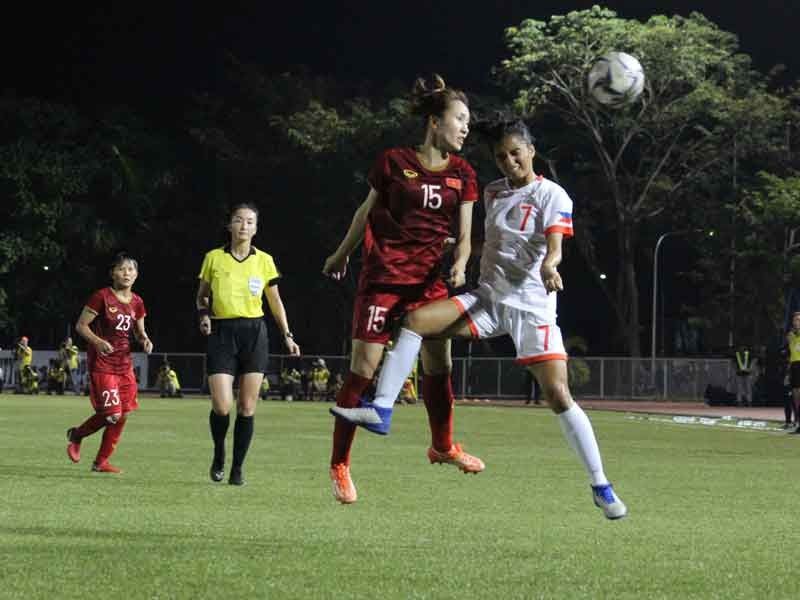 Malditas member Camille Rodriguez puts up a header against a Vietnamese defender in the 30th SEA Games women's football tournament at the Binan Football Stadium in Binan, Laguna.


Vietnam scored their two goals in the second half

The Philippine national women's football team succumbed to a strong second half performance by defending champions Vietnam, 0-2, in the semifinals of the 30th Southeast Asian Games (SEAG) women's football tournament on Thursday night at the Binan Football Stadium in Binan, Laguna.

With the loss, the Malditas are now relegated into the battle for bronze against Myanmar on Sunday at the Rizal Memorial Stadium.

Both teams engaged in a nip-and-tuck affair in the first half and it resulted into a scoreless half after 45 minutes of action.

Sarina Bolden and Quinley Quezada saw openings for a goal in the first half but failed to score the coveted goal for the host country.

In the second half, Vietnam figured things out and enable Thai Thi Thao to score the goal in the 60th minute.

Alisha Del Campo saw a potential goal in the 72nd minute but her attack was ruled offside by the referees.

The Vietnamese repeated a goal, courtesy of Thi Tuyet Nguyen in the 82nd minute to widen their gap against the FIlipina booters and keep their crown in the SEAG with their entrance into the finals.